How to Wash New Towels?

Personal hygiene requires no special gestures. It is often the little things we pay attention to that make each day a little more enjoyable. One such example is washing towels, which always leaves them smelling soft and fragrant. But, how to properly wash towels? Here are some tips to help you!

Bath towels, such as shower towels and guest towels, quickly become covered with dust, dirt, and bacteria. Therefore, washing and sanitizing towels as much as possible is essential, but hand washing can become tiring and messy. Therefore, it is advisable to wash towels in a washing machine with a cotton or white/colored program, choosing the appropriate temperature and refraining from bad detergent habits. Moreover, Marseille soap, vinegar, and bicarbonate are more effective, economical, and ecological products than the commercial detergents commonly used to wash towels in a washing machine.

How Often Do You Wash Towels?

The hygienically safest solution, changing towels after each use, is also the least sustainable. But that doesn’t mean you should keep on spreading germs. If you use your own towels and have no skin problems, changing and washing them every two to three days is safe.

On the other hand, shower towels and bathrobes should not exceed one week without being washed. Moisture and odor are also good indicators of when to change towels. If it smells or stays wet, it means that conditions are in place for bacteria to grow, and replacement cannot be delayed any longer.

How Should I Wash Towels for the First Time?

The first step in understanding how to wash towels in a washing machine is to read the instructions on the machine label carefully. You should have a clear idea from the first wash, which is done color-coded immediately after purchase, to remove dust and dirt and drain excess dye. When washing new towels in the machine, adding a cup of white vinegar to the bathtub is a good idea. Unlike industrial detergents, vinegar can fix and soften colors without changing the properties of the fabric or creating a patina on the surface.

How Many Times Should You Wash Towels?

As mentioned above, the washing temperature of towels can first be determined from the label. As a rule, towels should be washed by fabric and color. Since most towels are made of terry cloth, choose a cotton or white/colored program, and wash white towels at 60 degrees Celsius and colored ones at 40 degrees Celsius to prevent discoloration.

On the other hand, microfibers and synthetics should not exceed 30°. Furthermore, it is advisable to wash towels without different ones and to distinguish between white and colored towels on the first wash.

How to Wash White Towels?

Unless otherwise stated on the label, white towels should be washed at 40° or 60°. Avoid fabric softeners, as liquid detergent dispenses more evenly than powder. In fact, vinegar remains the best ingredient for keeping fabrics soft. Home remedies are also effective for bleaching towels.

For yellowed towels, simply soak them in cold water with half a cup of white vinegar and two tablespoons of coarse salt for one hour, then machine wash them.

To whiten or disinfect gray towels, soak them in water and vinegar or add 2 to 3 tablespoons of baking soda. 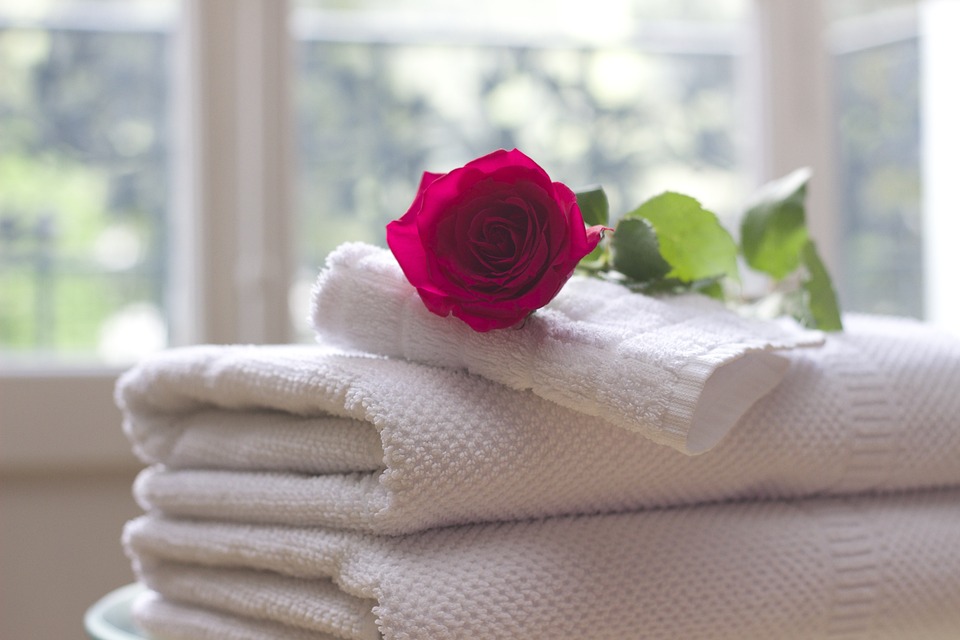 How to Wash Colored Towels?

For colored towels, which are also common in children’s bathrooms, the information on the label is most helpful. It is best to wash them at least 3-4 times, separating them according to hue, as the excess color may be lost at first. After this, unless otherwise stated on the label, wash according to the usual standards, at 40°C (for cotton towels) or 30°C (for synthetics), in a program for colored garments.

Again, we recommend choosing a liquid detergent and using vinegar as a fabric softener. Spread them in a well-ventilated area or outdoors to dry, but not in direct sunlight.

Let us know if these few tips have helped you in the comments below!

Essential Tips To Organize Your Laundry